What Is Colostrum And What Can It Do For Us? - Karen Berrios
FacebookPinterestYoutubeInstagram 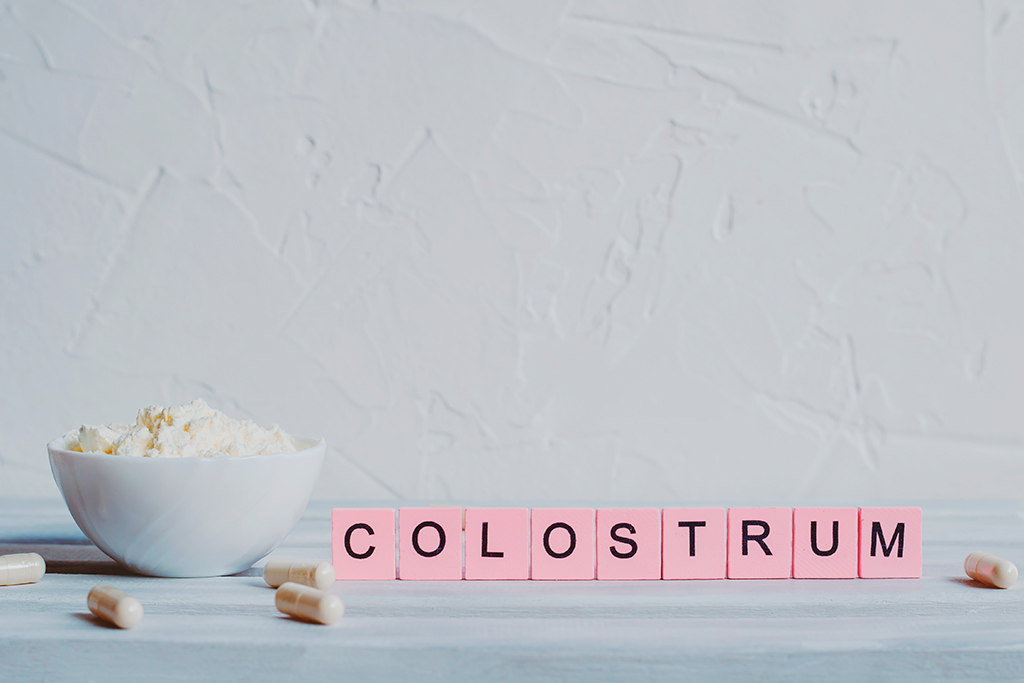 Colostrum is a super hot topic right now. Claims that it is anti-aging, great for the immune system, good for joints, for skin… There are many claims out there. Like you, I was interested to find out what the benefits are. What science says. What the experts believe to be true.

Colostrum is a fluid that comes from the breasts when females are lactating and producing milk for their babies. This applies to all other mammals as well. In fact, most of the colostrum we see being sold today comes from bovine (cow.)

Colostrum is often called “liquid gold” as it is incredibly nutritious. Saying it’s “nutrient-packed” would be an understatement. This liquid gold contains a high amount of antibodies which are proteins that can fight off bacteria and infections (ongoing or new.) Why God designed this liquid to originally be for babies is that it stimulates growth and health.

Dr. Andrew Keech is one of the leading Doctors that studies Colostrum. He even wrote the book “Peptide Immunotherapy: Colostrum” and believes that people all over the world can benefit from taking Colostrum. As a baseline, he says this about the liquid gold:

“Colostrum is a compound to start life. It’s the first food that we get when we are born. It’s the perfect food. It’s a repair mechanism for the gut. It STARTS the body’s immune system… for adults it can even help restart the immune system. It’s incredible. It’s a reboot. The primary ingredient is immunoglobulins, which are antibodies that have been developed by the mammals. These antibodies can help us control pathogens in the gut. Disease lives in the gut. Oftentimes we have 80% bad bacteria and 20% good bacteria, with Colostrum we are trying to reverse that. Colostrum is software for the human cell”

Healing the gut is incredibly important. In fact, it is something that I have on my mind everyday when I am planning out my meals. Getting enough fiber in. Getting enough plant variety. It matters! Serotonin is made in the gut, and this is important for gut health. The Immune system is heavily based in the gut. To ignore gut health would be to ignore total body health in general!

Not only does Colostrum have immunoglobulins, but it also has lactoferrin, and both of these help kill bad bacteria in the gut by pulling iron off of the bacteria, rendering it useless. This is useful in doing some major repair in the gut! The growth factors (hormones that stimulate growth) in Colostrum can also repair the gut. If we are to take Colostrum, this would take about six weeks. If we have a damaged gut, we won’t absorb many of the nutrients. We can see this happen in leaky gut. Healing the gut with Colostrum (specially the human growth factors) can maintain the integrity of the gut. It is a sure fire way to start a repair process and also help with maintenance.

There was one study that I found particularly interesting that dealt with serious athletes. There were twelve major athletes who were vulnerable to intestinal permeability- mainly due to heavy exercise. The study found that taking 20g of bovine colostrum a day prevented 80% of the uptick in intestinal permeability. This was compared to a placebo group.

One of the main reasons people like taking Colostrum is for the gut health factor. Many people have said they’ve gone years and years with gut issues and when they started using Colostrum, much like Dr. Keech said, it was a reboot for them.

The studies on this are quite impressive and equally important as so many adults deal with diarrhea on a regular basis and it really can impact the quality of one’s life.

There are specific compounds in colostrum (specially bovine, which again is what we use for adults today)  that may help treat and prevent diarrhea- especially that which is associated with viral infections. We owe this to the antibodies and lactoferrin in Colostrum.

There was a study in over 80 adults that suffered from diarrhea (this diarrhea was associated with HIV) and the study found that taking 100g of colostrum (bovine) a day significantly decreased stool frequency. Significant because it was by 21%! These participants were also taking some other medications to help but they found that by using Colostrum alongside they were more likely to experience relief than with traditional medications alone.

Another big cause of diarrhea is E. Coli. Colostrum can help with this. There is a great amount of Colostrum out there from Bovine that, prior to producing the liquid, were given immunizations against specific strains of bacteria. Why? This would then allow the cows to make colostrum that was high in antibodies that could help defend us against specific infections. This is called hyperimmune bovine colostrum.

Specifically talking about E.Coli- There was a study done in ~30 adults who were all healthy. The study found that the adults who had a dose (daily) of 1,200mg of hyperimmune bovine colostrum were 90% less likely to get traveler’s diarrhea. This was compared to the placebo group and of course, the colostrum had the antibodies against E. Coli. Isn’t that amazing? 90% is no joke! 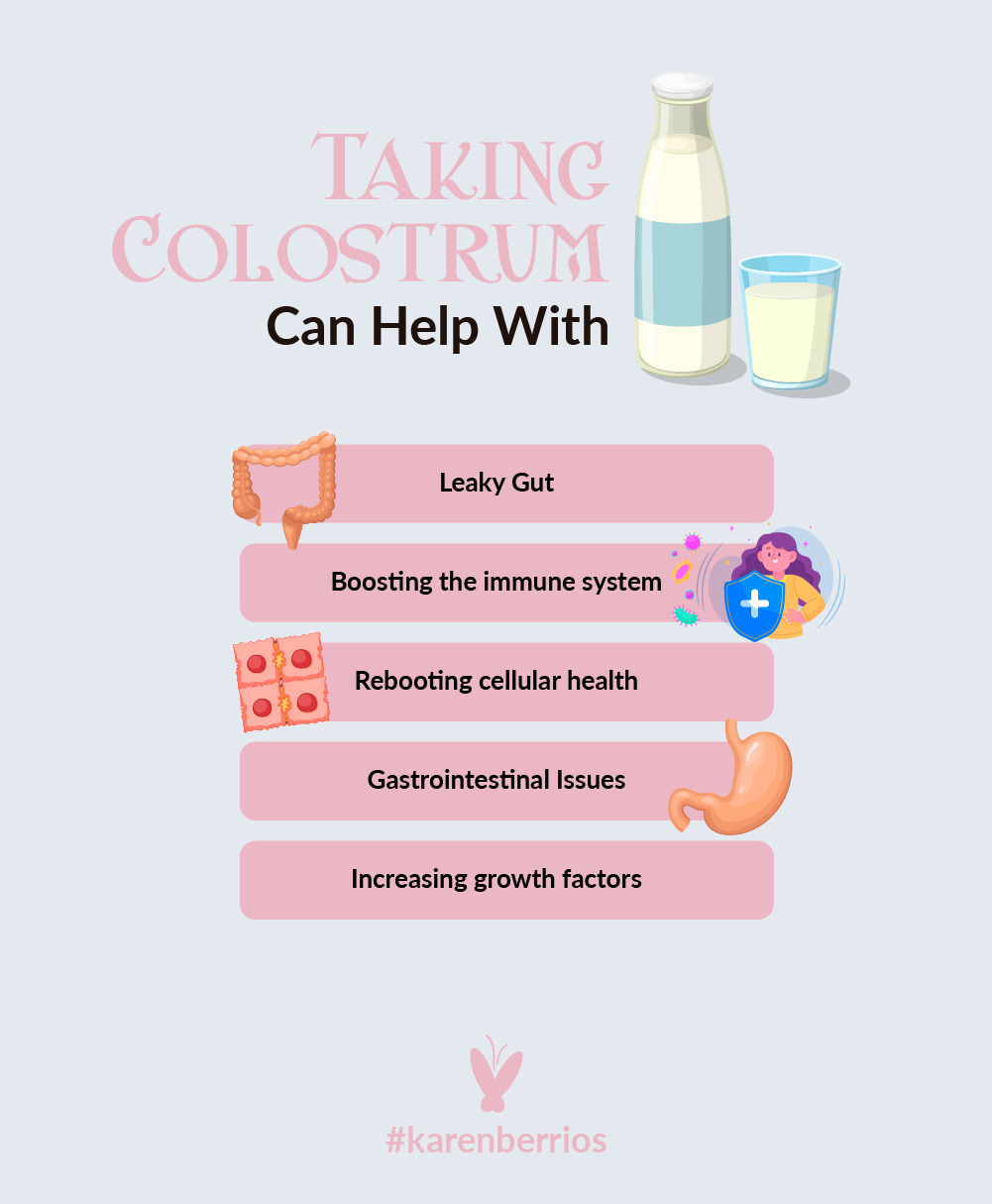 Colostrum and Boosting The Immune System

It is known that this liquid gold is what first gives a baby their immune system. So it should be thought that taking this liquid gold as adults can help reinforce our own or make it like new again. Of course, results will be different for every person.

There are specific immune-boosting effects that we can attribute to the high concentration of antibodies which we call IgA and IgG. These are antibodies that are proteins that will fight off certain viruses and bacteria. It’s like putting on boxing gloves for your immune system! Boom boom pow! 😉

Interestingly enough, there are multiple studies done on athletes and Colostrum. Another one was a 12-week study done in ~35 runners (adult age) and they found that taking bovine colostrum every day resulted in increased the amount IgA antibodies by 79%. This was compared to their baseline levels and they tested the antibodies in their saliva.

In the science world it is thought that higher levels of IgA in a person’s saliva may mean a stronger immune system. This can even help fight certain bacteria and viruses. Makes you want to go get your saliva checked, right?

Does Colostrum Help The Skin And Maintaining Muscle?

There are many high end skincare companies who tout the benefits of putting colostrum on the skin and muscle mass, however, there is more science needed to be conclusive on this.

There is a Physician ran clinic called Rejuve who wrote something interesting about Colostrum, however, keep in mind that this company sells Colostrum-based treatments so of course, they have an agenda here. But nonetheless, it is interesting. They say, “Colostrum can help with skin elasticity and more. The growth factors in colostrum are 100% bio-identical to your body’s own growth factors, giving you the benefits without the risks. Colostrum contains amino acids that help your body synthesize muscle tissue. When you age, your body’s muscles become resistant to being stimulated by these amino acids, making it more difficult to create new muscle tissue.”

Colostrum is cell building and cell repairing- so this does make sense. But again, there needs to be more research to see if it can actually turn back the hands of time when it comes to skin elasticity and muscle building.

There still needs to be more research done on whether Colostrum can help cancer patients or not. Many people make the connection themselves that it can be great for prevention because it helps the immune system greatly and is wonderful for gut health. One could conclude that Colostrum could help prevent colorectal cancer due to how potent it is for the gut/intestines, but still, more research is needed.

There is a scientific study that talks about how lactoferrin (present in Colostrum) can help with cancer metastasis. This was taken from bovine colostrum.
Another scientific analysis stated that lactoferrin can be beneficial especially in gastrointestinal cancers and disorders. After mentioning the gastrointestinal benefit, the analysis stated this:

“Recently, bovine colostrum (BC) has caught the attention of many investigators to explore its anticancer potential in humans. BC impregnated dressings are highly effective in treating chronic wounds and diabetic foot ulcers. BC is rich in lactoferrin, a glycoprotein with strong antioxidant, anti-inflammatory, anti-cancer, and anti-microbial properties.”

While more research is needed, this is highly promising!

Final Thoughts and Who It’s Not For:

It can be quite interesting to experiment with colostrum and it makes sense why it is seen as something so magical in the science world. The science is strong and there is an echo of happy people all over who have tried Colostrum and seen some serious results. Unfortunately, those with a dairy allergy should not take colostrum. Many can tolerate it, but many can’t. That would be something you’d need to talk to your health practitioner about.