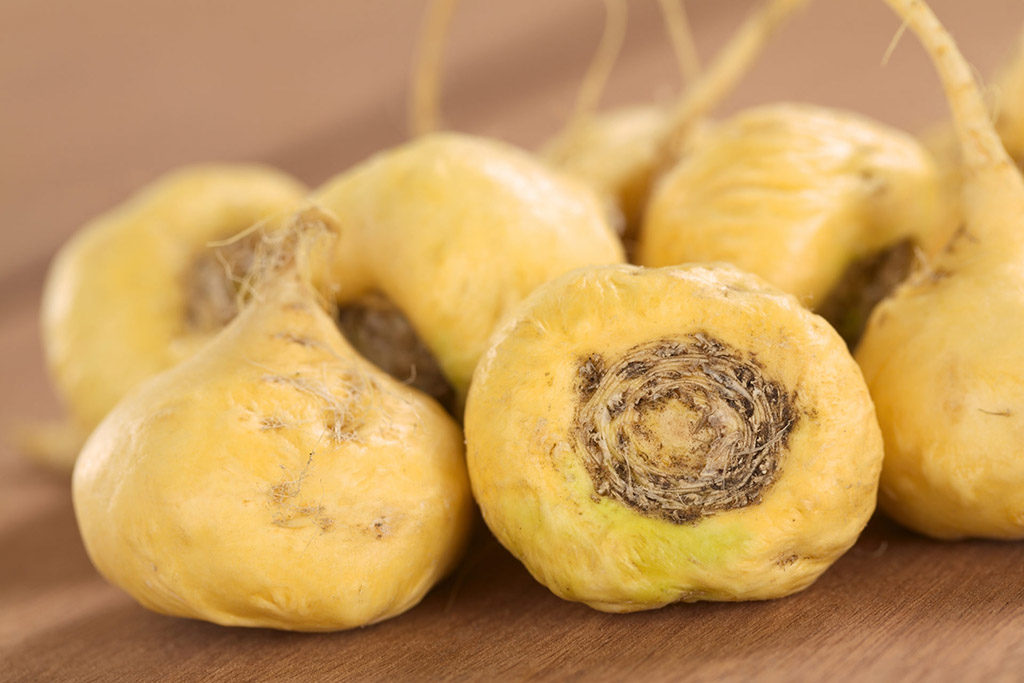 You cannot do a search for “superfoods” without coming across maca root. The Peruvian superfood looks like a potato, but it is a part of the cruciferous family. That makes it more similar to broccoli than potatoes. This root, native to my home country, has incredible healing abilities. It is an incredible source of antioxidants and cancer-fighting compounds. It has been used and consumed for its healing properties in the Andes region of Peru for thousands of years. In the United States, it is making waves as one of the healthiest superfoods available. While we cannot generally get our hands on fresh maca root here in the United States, we DO have access to ground maca root powder. The powder has a slightly sweet, nutty, earthy flavor, which makes it an incredible addition to smoothies, cereal, soups, stews, or pretty much anything else you might be making.

Maca is an Adaptogen

Adaptogens aren’t a new concept. They are defined as “herbal preparations that increase attention and endurance in fatigue, and reduced stress-induced impairments and disorders related to the endocrine and immune systems.” A very well-researched and well-documented 2010 study shows the way adaptogens work in our bodies. They have been shown to have a therapeutic impact on our bodies on a cellular level. They regulate the stress response in our bodies as well, which can be beneficial to overall health and wellness.

Maca is one of these herbal preparations that acts as an adaptogen in our bodies. In a 2015 study, maca was shown to help reduce blood pressure AND depression. The pilot study shows the use in postmenopausal women reduces diastolic blood pressure as well as symptoms of depression and further cementing its place in medicine as an herbal adaptogen.

As we age, a common concern is diminished interest in sex. For people who take anti-depressant medications, a notable side-effect of the medication is a decrease in libido. A 2015 double-blind clinical study set out to determine if maca could help restore sexual function in women taking anti-depressant medication. The study had remarkable results warranting additional follow-up studies. It was found that maca root alleviates anti-depressant induced sexual dysfunction as women age.

So many couples struggle with infertility these days. A 2016 study indicates that in Britain, 1 in 8 women seek help for infertility. In men, 1 in 10 are troubled enough by infertility to seek treatment as well. That means 12.5% of women and 10% of men in the population have reported problems conceiving. About half of those people seek professional treatment for fertility problems.

What’s more, in about half of infertile couple, the issue is with the male’s reproductive system. A 2001 study shows that maca improves sperm production and motility. In 2015, researchers worked on expanding the understanding of maca on sperm production. The results are incredible and show that men who took 3 grams of maca daily had a statistically significant increase in sperm concentration by 35%. Total sperm count was raised by a whopping 84%. And sperm count motility increased by 109% after 16 weeks of treatment. Those numbers are significant for men who struggle with fertility.

It isn’t just the men who can experience improved fertility with maca powder, either. Women can experience increased fertility as well and a 2005 study shows the potential for women’s fertility. In the study, reproductive adult female mice were given yellow maca root. Those mice were found to have increased litter sizes as a result of the maca. This shows promise in treatment of fertility problems.

Women all experience menopause differently. Some sail through this dramatic shift in hormones without so much as breaking a sweat. Others suffer terribly from hot flashes, burning mouth syndrome, changes in mood, slowed metabolism, and insomnia (among other symptoms). For those who suffer uncomfortable symptoms as hormone levels shift in mature women, treatment can include hormone replacement therapy. The problem with these therapies is that they are known to increase the risk of certain types of cancers (specifically breast cancer), and they are generally synthetic hormones. This means they might be biologically similar, but not biologically identical, and the difference between the two is immense.  Bioidentical hormones act on more pathways in the body. Bioidentical hormones are natural and are the same molecular structure as the body’s own hormones. This means that estrogen levels can be measured precisely, as well, which make therapy easier.

While bioidentical hormones sound much more appealing as a natural hormone therapy, it would be better still if our bodies could produce their own hormones at levels to keep us, as women, feeling more like our usual selves. This is where maca comes in. Maca is able to help balance female hormones, and the greatest benefit has been seen in pre-menopausal women. A frequently-cited 2006 study shows an improved hormone balance in post-menopausal women. However, the study also suggests that pre-menopausal women may experience the best results from the root.

As those of you who follow me on my healing journey, you know that I believe there is emotional root that can lead to cancer. Part of my journey so far has been to uproot the emotional aspects of my own life which may have led to my own cancer diagnosis. Had I known there was a Peruvian superfood that could potentially help heal that emotional aspect of my life, perhaps I would not have been personally touched by cancer.

With that being said, maca’s anti-anxiety and anti-depressant properties are worthy of discussion. A 2014 study showed that maca reduced cortisol levels and proved anti-depressant qualities of the root when taken for six weeks. This finding blows the top off of the regular treatment for depression. It suggests we may be able to treat depression in some people naturally and avoid a lot of the uncomfortable side effects associated with traditional anti-depressant and anti-anxiety medications.

Maca is a Powerful Antioxidant

Free radicals and oxidants are terms that are sometimes thrown around when talking about healing foods, superfoods, and cancer prevention. Free radicals and oxidants create something known as “oxidative stress”. This causes the cell membranes to deteriorate, making cells more susceptible to damage from free radicals. This can result in damage to DNA in the cells, which causes mutations. These mutations can occur in any number of ways, but one of the most common mutations we know of is cancer.

A March 2018 study shows the protective, antioxidant properties maca has. In the study, stallion semen is treated with maca root to reduce the damage of oxidative stress during cooling and transport. The results showed the integrity of the semen to decline more slowly in those treated with maca.

An earlier study from 2007 also shows the potential maca has as an antioxidant and cancer-fighting supplement. The results show that it is promising for preventing certain types of chronic human disease—particularly cancer.

Not only does it prevent certain types of cancer, but it has also been shown to improve cognitive function. The 2016 study involving middle-aged mice showed that aging mice experienced less loss of cognitive abilities as they aged when they were administered maca on a daily basis.

Maca is a wonder supplement. There’s a reason why Peruvians have used the root for medicinal purposes for thousands of years. The root offers countless health benefits with very few (if any) side effects. Ultimately, the anti-oxidant properties of maca make it an invaluable supplement in that it can prevent cancer and protect the brain. Women going through menopause or even approaching menopause can find some of the greatest benefits from maca root. Since it is shown to balance hormones, it can ease the discomfort many women experience as they go through the stages of menopause in a natural and effective way.