Are emotions tied to the human body? Can emotions or past traumas cause cancer?

I certainly believe so. I have stated before that I firmly believe that part of my cancer is rooted in my past life- past emotions, traumas… only the ones that weren’t serving me. The ones I couldn’t deal with that settled into my body.

I have learned that emotions are there to provide information, these are not right or wrong. We MUST learn to acknowledge, process, and let them go. Emotions can also tie to the question, “But why did I get cancer?” as certain emotions are tied to this disease, and tied to certain ailments.

Certain emotions are why some people are thought to overcome cancer sooner, or remain bright during treatment. Do you know someone with cancer (maybe it is you) that has an enthusiastic, won’t-give-up kind of spirit? Those people are at an advantage with cancer! Their experience will be much different than the person who chooses to feel defeated, angry, or sad each day.

Emotions are incredibly powerful on the human body and they most certainly can be tied to cancer. Let’s explore more in-depth what science has found in the connection between emotion and illness and also which emotions are tied to certain parts of the body– and cancer as a whole.

Healing Therapies Based Around Emotion

One of my favorite healing modalities was Recall Healing. It is all about how past traumas and emotions are stored in our body and manifest as illness and pain– it is rooted in the belief that certain organs and parts of the body are tied to specific emotions.

I once interviewed Dr. Shrader on the subject. She is a master in Recall Healing. I worked with her personally and she is also active in the KB community of healers. She said this about past traumas and emotions and the human body:

“In Traditional Chinese Medicine, in Ayurveda medicine… they were very much aware of the mind-body connection…  Most people hear ‘Recall Healing’ and think it’s this new-age trend. But remember this, it never goes against biology. I might have stomach cancer because I had a hard time digesting something in my life…that’s an example. There are many more. We find that the apple doesn’t fall far from the tree… What we say in Recall Healing is this: ‘If we don’t deal with our issues, they’ll wind up in our tissues.’”

Our thoughts, our feelings… emotions emitted… These and everything around us carry energy. This energy radiates a level of measurable frequency that will cause an impact on you and your tangible circumstances. This frequency will carry a level of substance that will bring change if we desire. This frequency can be healing or destructive.

Cancer is a wake-up call, it was most definitely for me. The moment you start feeling gratitude, abundant, healthy, whole, full of love for you and others… all emotions that vibrate at a higher frequency– that is when your body can start to heal.

Do you feel chronic sadness, anger, jealousy, or angst? These emotions carry low frequencies and will harm you in the end.

Positive emotions = positive frequency. By the way, it is okay and normal to experience negative emotions. It is not okay to sweep them under the rug and let them fester.

Emotions And The Immune System

Did you ever think that maybe your sadness or depression could have an impact on your immune system? It definitely can. Even stress- think of times when you were stressed out and traveling– you got sick! Or so stressed out at work that you started having stomach problems. Emotions sit within our bodies, good or bad.

To lead an example, let’s look at depression. Lots of negative emotions reside in depression.

One 2008 study shows us social and emotional support from others can be protective for our health- those that don’t have this tendency to be more depressed. Social integration plays a role in mortality and how we feel in the world. In fact, being “social” is one of my five pillars of health for this reason. In the study mentioned, older men who lived alone with no (or little) social and emotional support in place had a shorter lifespan. Their bodies were not as strong. This points to emotions playing a major role in our overall health.

Further evidence regarding cancer and an emotional connection can be seen in a 2012 study among end-of-life cancer patients. The eye-opening results show that the mind matters in cancer survival. Patients who received palliative care instead of traditional therapies showed that living better meant living longer. Isn’t that incredible? 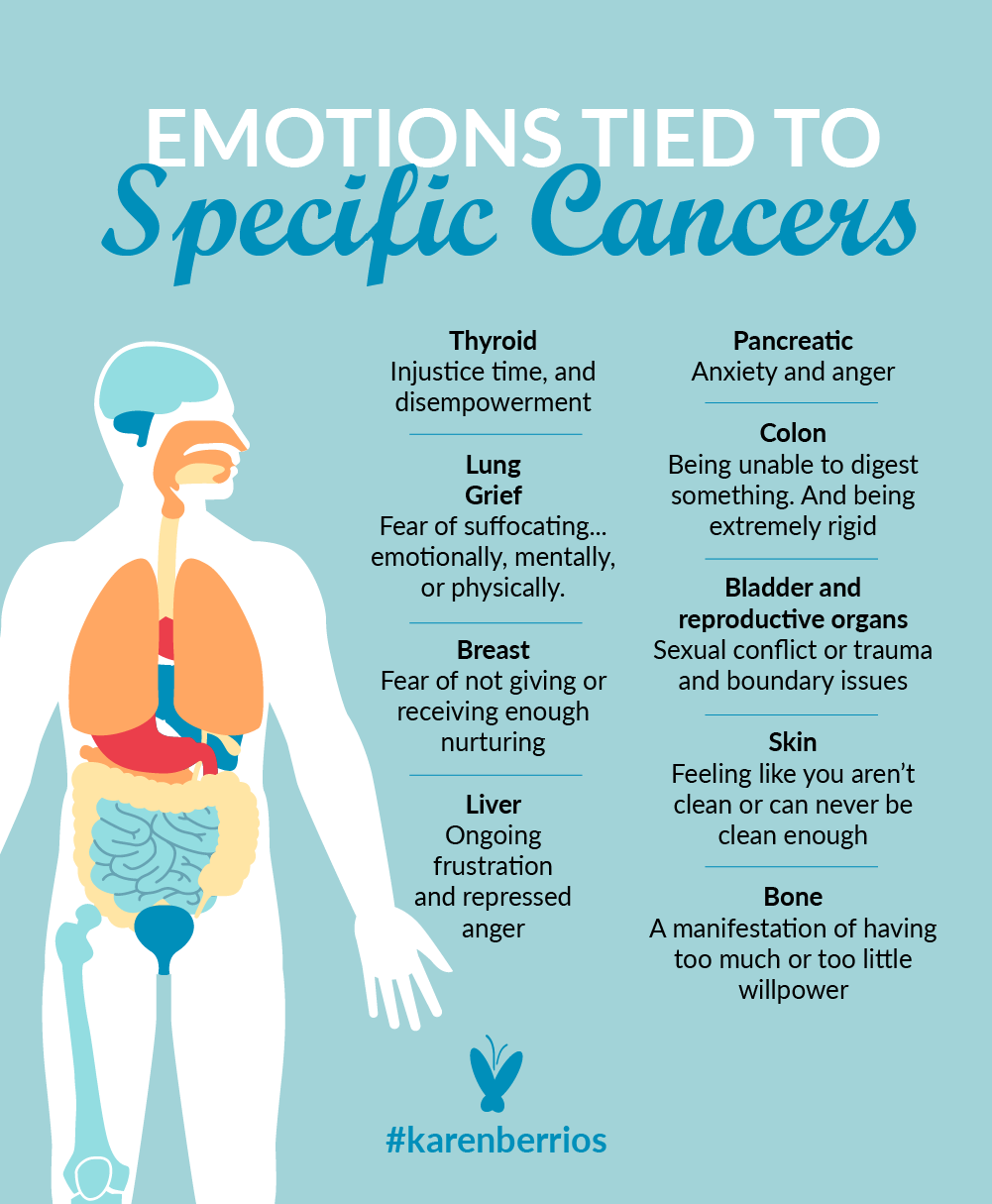 So Which Emotions Are Tied To What Organs?

Famed German doctor, Dr. Hamer, was one of the first to talk about specific body parts correlating to different emotions and how cancer can follow if it gets out of hand. Acupuncture today says this about Dr. Hamer:

“The controversial German doctor Ryke Geerd Hamer discovered what he calls the “shock-conflict” causation of cancer and other major diseases. He proposed that cancer stems from emotional-psychic causes that remain unresolved over long periods of time, and that emotional healing and meditative practices provide the best cancer treatments.”

Dr. Haman also said that emotions are tied to the healing of cancer. Or the repair phase: “Many of the most uncomfortable inflammatory symptoms, and the formation of many of the tumors showing up in scans, are actually part of the healing process.”

Traditional Chinese Medicine also has correlations between specific emotions and organs. Dr. Dharmananda, the Director of the Institute for Traditional Medicine in Portland, Oregon says this about emotions and specific ailments: “Indeed, it is possible that even a single period of intense stress lasting months, such as occurs with a divorce, death of a family member, loss of a job, or other life-changing event, rather than decades of habitual emotional distress, might lead to serious damage to the tissues which could trigger the development of cancer.”

Here is what we believe is closely tied together when it comes to cancer:

Lung: Fear of suffocating… emotionally, mentally, or physically. It is also tied to unrelenting grief.

Breast: Fear of not giving or receiving enough nurturing. It can also come from separation conflicts and feelings of betrayal.

Pancreatic: Anxiety, anger, conflicts within the family– including inheritance issues. There is also relationship trauma often stored in the pancreas.

Colon: Being unable to digest something. Also being extremely rigid, being unwilling to adapt, and lastly expressing anger in a very rage-filled way.

Bladder and reproductive organs: Often is a sign of sexual conflict or trauma and boundary issues. Can also be a sign of “needing to mark your own territory” too often.

Skin: Feeling like you aren’t clean or can never be clean enough. Also being out of touch with the world’s rhythms, like seasons changing or time zones being different.

Bone: This can be a manifestation of not feeling good enough, having too much or too little willpower.

If you are dealing with some sort of emotional conflict I would strongly encourage you to really do the work to acknowledge it, process it, and let it go. If you choose to ignore your emotional health, sooner or later your body will let you know and it may be too late. Trust me, I know it is uncomfortable and hard to do this work but it is imperative for your health and your life.

As always I encourage you to share your thoughts and experiences with me, I love learning from my community and walking this healing journey together. God bless!