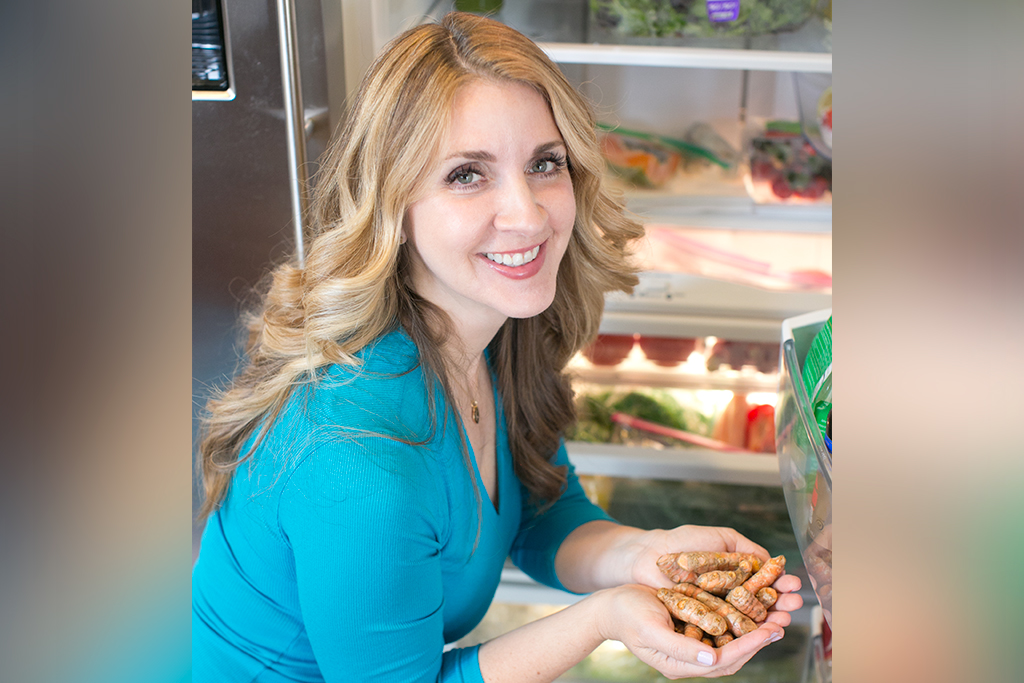 I have been an appreciator of turmeric for a long time. Since my cancer thriving journey began, I have used turmeric intentionally to get the most out of its healing and therapeutic benefits.

The science says it all- turmeric is a true medicinal plant! It’s not wonder holistic experts all around the world look to turmeric as something to put in the diet to support healing, cancer prevention, and general wellbeing!

There are many cancer fighting foods and inflammation lowering foods that I have in my kitchen every day. I am always cooking with them. Turmeric will always be one of them. Let’s explore some benefits and then I’ll share with you a turmeric hot cocoa recipe!

First thing is first, we owe the knowledge of this spice to Indian culture, who has shown us that turmeric is a medicinal way to lower inflammation. The active compound in turmeric is curcumin- that is key to know if you ever buy turmeric supplements, you want to look for a high amount of curcuminoids.

One of the major benefits seen with turmeric is improved overall gut health. The curcuminoids have shown to help the glands within the colon to regenerate and heal. For people who have issues with leaky gut or other colorectal health problems, turmeric may be part of the solution to help improve overall gut health. This includes helping to fight specific types of colorectal cancer.

I would also like to share with you a quote from this 2019 study, showing how curcuminoids can help the gut bacteria. “Curcumin in the gut favors the growth of beneficial bacteria strains such as Bifidobacteria and Lactobacilli, with reduction of pathogenic strains. In addition, curcumin treatment has been found to decrease the microbial richness and diversity, with a specific reduction of species found as cancer-related.”

Turmeric also helps with cancer prevention. In fact, there was a study done in 2013 where researchers found that people with high-risk factors for cancer or those with a previous cancer diagnosis benefited from adding a curcumin rich regimen to their daily routines.

On that same thought, a study published recently  shows that curcumin inhibits tumor growth in colitis-associated colorectal cancer. Additionally, it suppresses inflammation levels in the colon and shows promising results in reducing tumor number and size in colitis-associated colorectal cancer. This is an extremely promising breakthrough in that it offers a natural approach to cancer prevention and treatment.

Additional scientific studies have shown an improvement in liver health and function in those with chemically-induced liver damage when consumed. Curcumin works to heal and repair the liver in several ways. It has been found that a curcumin-enriched diet in mice was not only well-tolerated (with a survival rate of 100%), but it also reduced sclerosing cholangitis, ductular proliferation, serum liver enzymes, and bile acid levels over 4 weeks of feeding. The entire study can be seen here, but the greatest takeaway is that curcumin consumption has a definite positive effect on liver health with no side effects.

Alzheimer’s is an ugly disease. Almost all of us know somebody who has been touched by the disease in their lives. Alzheimer’s Disease is among the most common forms of dementia in elderly individuals. It is also the sixth leading cause of death in the United States. With such a staggering number of people who suffer from this disease, it is a widely studied medical condition which has yet to be cured. With that being said, curcumin has shown promising results in helping to prevent the onset of Alzheimer’s Disease. The study concludes that curcumin has protective effects and protects against synaptic toxicities in Alzheimer’s Disease neurons.

For those who suffer from osteoarthritis, mobility can be a major problem with quality of life deteriorating rapidly once symptoms set in. Regular prescription medications for treating the symptoms of osteoarthritis have proven to be fatal at times. Years ago, a popular prescribed prescription drug known as Celebrex was pulled as it was linked to fatal heart attacks. In fact, prescription NSAIDs have been shown to possibly DOUBLE the risk of fatal heart attacks in users! Turmeric, on the other hand, is a safe and effective way to reduce inflammation and provide relief from arthritis pain. The findings of a March 2018 study show curcuminoid formulations could be an effective addition to osteoarthritis knee treatment regimens. The addition of curcumin to treatment regimens of arthritis sufferers were “statistically more effective than placebo for pain relief and functional improvement.”

There is also some evidence to support improved skin health as well as improved wound healing with the addition of turmeric. For many, a topical paste of the spice is used to treat acne, unclog pores, increase “glow and luster” of the skin, and has additionally been shown to increase wound healing. It is believed the antimicrobial and anti-inflammatory properties as well as other curcuminoid compounds are helpful in treating many skin conditions. For wound healing, there did not seem to be a preference for means of using turmeric meaning there is an equal benefit for taking it internally as there is for applying it topically.

More info for turmeric and the skin in this article here and this study here.

Many people love their hot chocolate, but what if I told you there was a way to spice it up? Literally and figuratively! Spice up the flavor, and spice up the benefits!

If you have not mixed turmeric and cacao together, you are missing out! The flavors play together beautifully.

Try this for your next hot chocolate recipe!