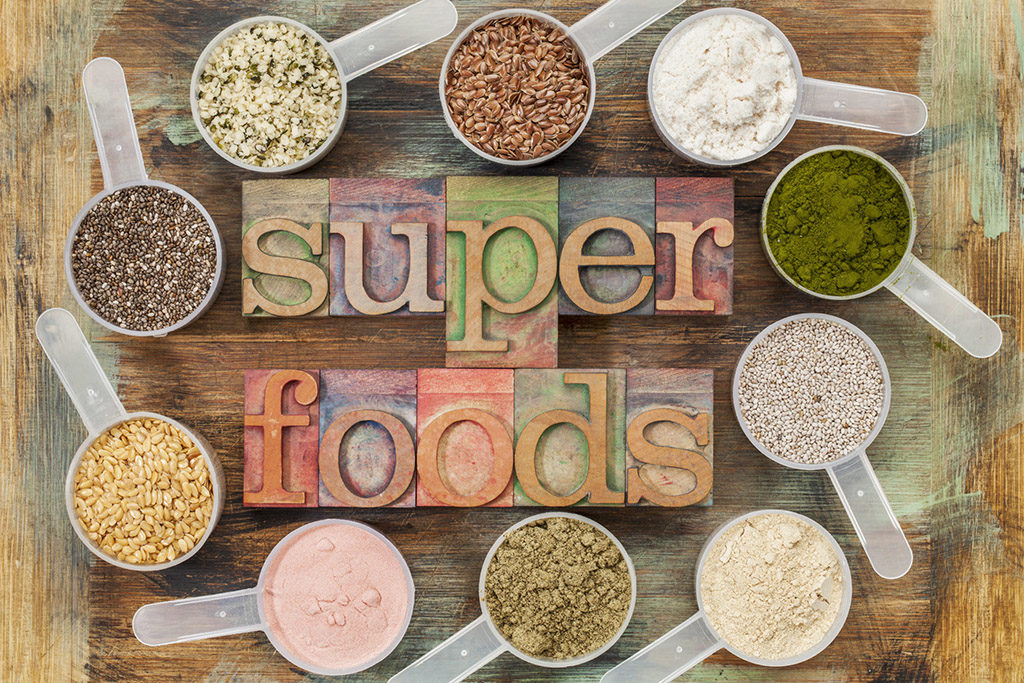 My beautiful Peru is home to Machu Picchu, Lake Titicaca, and some of the most powerful superfoods in the world. All over the world, peoples’ diets are making them sick. In the United States, diabetes is rising at an alarming rate. The Institute for Alternative Futures has estimated that the rates of diabetes will increase by as much as 54% by the year 2030. If that in itself isn’t alarming enough, cancer rates are also increasing dramatically. The average age of people being diagnosed with cancer continues to go down, meaning more children and adolescents are diagnosed with cancer each year. And the number of people diagnosed with cancer continues to rise each year. A 2017 study has estimated that by the year 2020, the rates of cancer will increase by over 24% in males and over 20% in females. With rates of disease and cancer on the rise, it only makes sense that Peruvian superfoods are getting more attention. Here are the top 5 cancer-fighting Peruvian Superfoods and their benefits. 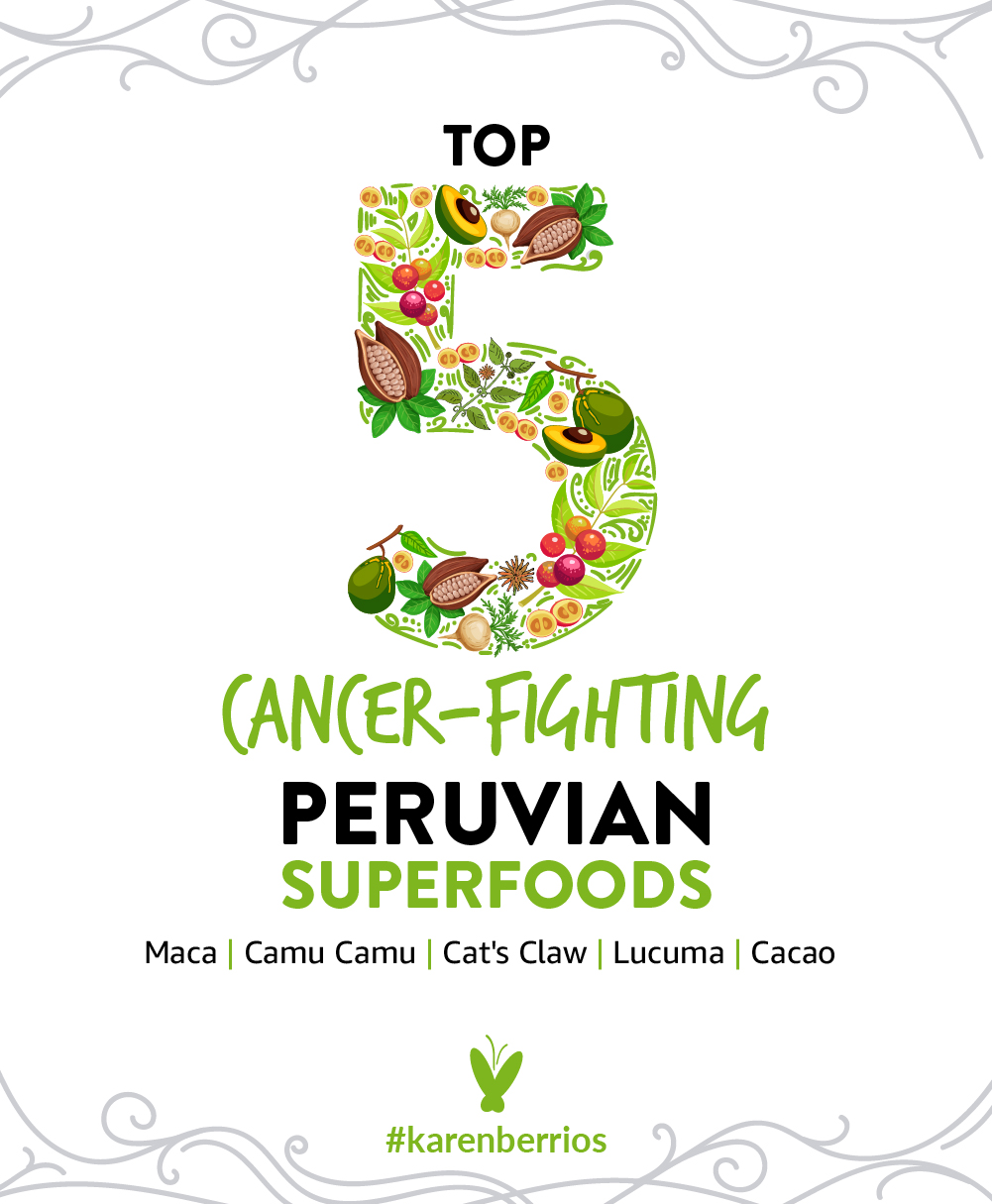 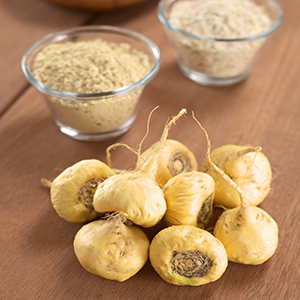 For those of you who are already familiar with maca, you know the amazing benefits this Peruvian superfood can have. In Peru, maca is grown in the mountains. It is considered one of the healthiest natural ingredients in the entire world. Maca itself is similar in appearance to the common potato. Yet it is far from the tuber that so many Americans eat with every meal! It is actually considered a cruciferous vegetable, which puts it in the same family as broccoli, radishes, and watercress. However, it tastes NOTHING like broccoli or radishes. It has an earthy, nutty flavor that is almost sweet with a hint of caramel or butterscotch. Red, yellow, and black maca all have slightly different flavor profiles, though all have amazing health benefits.

Given my own cancer diagnosis, it should come as no surprise that maca has powerful cancer-fighting properties. It is mostly known for its hormone balancing effects. A 2005 study showed that 42% of post menopausal women supplementing with maca experienced a significant reduction in menopause symptoms. The same researchers took the study a step further after seeing such promising results in their 2005 study. They found that not only did maca consumption help ease some of the psychological and physical symptoms of menopause, but that it actually improved bone density as well as lowered levels of cortisol (stress hormone).

In 2011, a study was published investigating some of the benefits of maca. In addition to helping improve fertility in both men and women, it also showed excellent potential in fighting cancer. In 2008, researchers discovered maca reduced damage to the skin from UV rays. This discovery is huge for those who are looking for natural and healthy ways to protect the skin from UV radiation without the use of toxic chemicals. 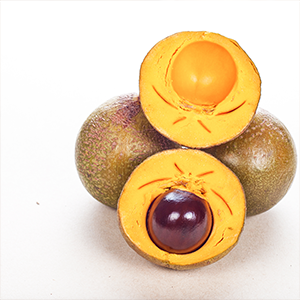 This superfruit is grown in the Andean valleys of Peru, Chile, and Ecuador. From the outside, it looks like a smooth avocado or a small mango. Because of it’s extremely high nutritional value, lucuma has been referred to as Incan Gold. The fruit itself has a taste similar to maple syrup or sweet potato. However, because the fruit ripens so quickly and is so delicate, it is difficult to find fresh in the United States. In most cases, lucuma is consumed in a powdered form where it can be added to smoothies, sprinkled on oatmeal, or baked into foods for a slightly sweet taste.

There is a reason why lucuma is referred to as Incan Gold—lucuma is a powerful superfood that has been proven to help stabilize blood sugar. This is promising for helping prevent and fight diabetes! A 2009 study looked at Peruvian foods and their benefits. The results showed good potential for naturally fighting high blood pressure and high blood sugar.

Another study focused on the use of the lucuma nut powder in wound healing and inflammation. The study found that lucuma is a potential new bioactive botanical in the field of wound care. The fatty acids found in the lucuma nut helped prevent infection, reduce inflammation, and promoted healing. We can take what we know from this study a step further. Lucuma powder is particularly high in unique long-chain fatty acids. We also know from a groundbreaking 1997 study that long-chain fatty acids can help prevent certain types of cancer—particularly breast cancer. Long chain fatty acids have been linked to preventing an aggressive form of breast cancer known as Triple-Negative breast cancer. Lucuma powder is extremely high in extra-long chain fatty acids, which can help reduce the risk of certain types of cancers. 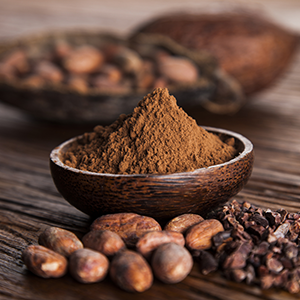 Most people are familiar with cacao in the form of chocolate. There is a difference, however, between cacao and cocoa. Cacao refers to the tree from which cocoa is derived. The cacao tree is native to South America, and its name is derived from Greek meaning “food of the Gods”. Normal chocolate and cocoa powder have been roasted and chemically processed. This removes a lot of the good stuff from it. Cacao, however, is generally unprocessed. The health benefits of cacao are extraordinary. It has been shown to do just about everything from improving mood to acting as an aphrodisiac.

A 2013 study of cacao and cocoa showed that it can help reduce blood pressure and stabilize blood sugar. This is attributed to the high level of flavonoids in cacao.  The same study goes on to show that some of the compounds in cacao, particularly theobromine, is responsible for improving memory and preventing Alzheimer’s disease!

Furthermore, cacao poses some powerful cancer-fighting abilities. It doesn’t just prevent cancer, it actually has been shown to fight cancer. A 2016 study investigates the flavonoid compounds in cacao and their anti-tumor potential. The results are astonishing and show that cacao and its derivatives have the potential to be used as chemotherapeutic medicine. Cacao can seemingly do everything from fight cancer to offering up a delicious dessert! 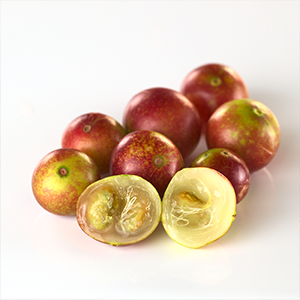 This Peruvian berry is found in the wilderness of the Amazon rainforest. It thrives in very wet conditions. It’s not something that people can just grow in their backyards like strawberries or blueberries. The health benefits of this potent little berry, however, will make people wish they could! Camu Camu contains more immune-boosting and inflammation-fighting Vitamin C than any other food. In powdered form, just one single teaspoonful of the powerful berry contains 1200% of your daily recommended minimum for Vitamin C!

Its anti-inflammatory and antioxidant properties make camu camu a powerhouse for preventing age-related diseases. A January 2015 study goes in-depth about the benefits of the Peruvian berry including its significant anti-inflammatory benefits. The camu camu berry is exceptionally versatile in that all parts of it are high in anti-oxidative compounds including the seeds, pulp, and skin. The study also discusses the importance of bringing the berry into mainstream use because of how powerful and beneficial it is.

A 2016 study set out to investigate the effects of camu camu on different types of cancer. The study found that the antioxidants and naturally-occurring compounds found within the berries are not only preventative in tumor growth, but they also shrink cancer cells! 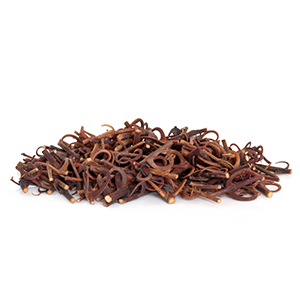 This woody vine is native to mountainous regions of Peru. It’s name is derived from the plant’s appearance as the thorns resemble the claws of a cat. The plant has been used for centuries for treating various illnesses and diseases in South America, but it is gaining attention and momentum in the United States because of its anti-inflammatory and anti-tumor properties.

The supplement is often found in a powder form and is used to prevent and treat a number of conditions from helping with digestion to easing the discomfort of rheumatoid arthritis. There are a number of studies that have been done on the benefits of Cat’s Claw, but one of the most intriguing has to do with it’s cancer-fighting potential.

In 2015, researchers discovered that Cat’s Claw helped improve the quality of life in patients with advanced solid tumors. The supplement was shown to reduce fatigue, and in several patients, their disease stabilized during treatment!

In fact, Cat’s Claw is often used as a supplement during cancer treatments. Its active compounds are helpful at fighting fatigue and inflammation that can occur during treatment. It has also been shown to help repair cellular DNA damage as a result of therapy.

My beautiful Peru has so many gems hidden within its lush forests, soaring peaks, and flowing rivers. The foods that are native to my country hold a very special place in my heart and body. Among some of the most precious of those hidden gems are some of the superfoods that are native to my homeland. The powerful antioxidants that are native to Peru have made the rates of cancer lower for Peruvians than many places in the world. In fact, a 2015 listing by the World Cancer Research Fund International lists the United States as number 6 in the world with the highest cancer rates. Peru didn’t even make the list. Much of America’s high cancer rates can be attributed to diet. When we compare the superfoods of Peru to the Super-sized meals of America, it seems obvious that the answer to fighting cancer is complex, but what we eat plays a huge part.