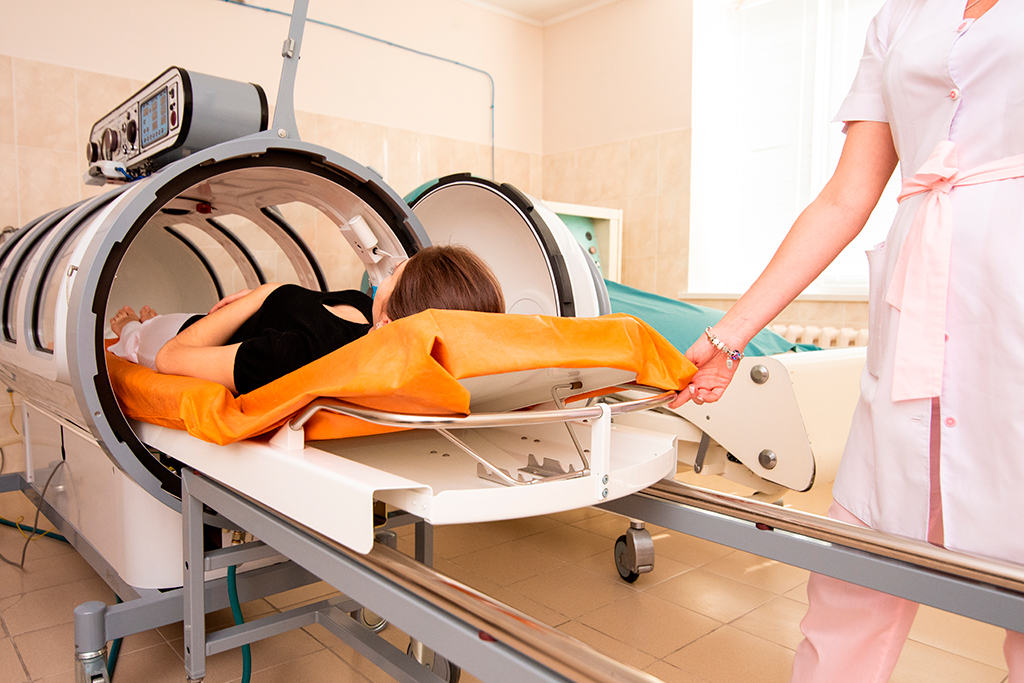 Hyperbaric oxygen therapy is something that was part of my healing journey and so I wanted to talk more about it. My experience, what it is, and ask the question… Can this therapy kill cancer cells?

Let’s get into it.

What is Hyperbaric Oxygen Therapy?

This is a noninvasive treatment. It is a more alternative treatment although it’s getting more and more recognized by Western Medicine as years go on. Hyperbaric Oxygen Therapy (HBOT) has helped so many people live healthier, more pain-free lives.

Hyperbaric oxygen chambers work by having patients go into a pressurized chamber. It is surrounded by 100% oxygen. Most treatments are 90 minutes. It brings them down 2 atmospheres worth- it is like swimming down to the deep end of the pool. During this, the body is exposed to a higher percentage of oxygen than it is usually exposed to- as well as being in an increased pressure environment. It lets the body absorb a higher amount of oxygen than it normally would.

During the treatment, as the chamber is pressurized with the oxygen, the air feels warmer and warmer. Then the temperature settles. It’s usually comfortable enough to take a nap in!

Hyperbaric oxygen therapy has been around for years and was originally used for diabetes and wound healing. Now many patients are using this before and after cancer.

My own experience with Hyperbaric Oxygen Therapy

I first started doing Hyperbaric Oxygen Therapy during the month that I spent at the Hope 4 Cancer Institute in Mexico. This therapy was part of my daily regimen while I was there, and I often looked forward to it as one of my favorite parts of the day.

When I came back home I was able to find clinics in my area where I could continue this therapy. However, due to cost restraints I could not continue with the daily Hyperbaric Oxygen Therapy treatments. Instead, I switched to only going in for treatments for a few times a week for a period of time (what I like to think of as a “season,”) and then stopping completely for a while.

Your body’s normal, healthy cells require a constant supply of oxygen in order to survive. They use oxygen to produce cellular energy via the mitochondria, in a process called aerobic metabolism.

However, cancer cells have an altered metabolism and do not require oxygen. These cells use anaerobic processes to produce energy from both glucose and amino acid fermentation. What is most important if you have cancer is that environments with a high level of oxygen have been shown to be toxic to cancer cells. An environment that is rich in oxygen—such as what is created during Hyperbaric Oxygen Therapy—slows cancer cells’ growth and can trigger their death. (Or can't it?) 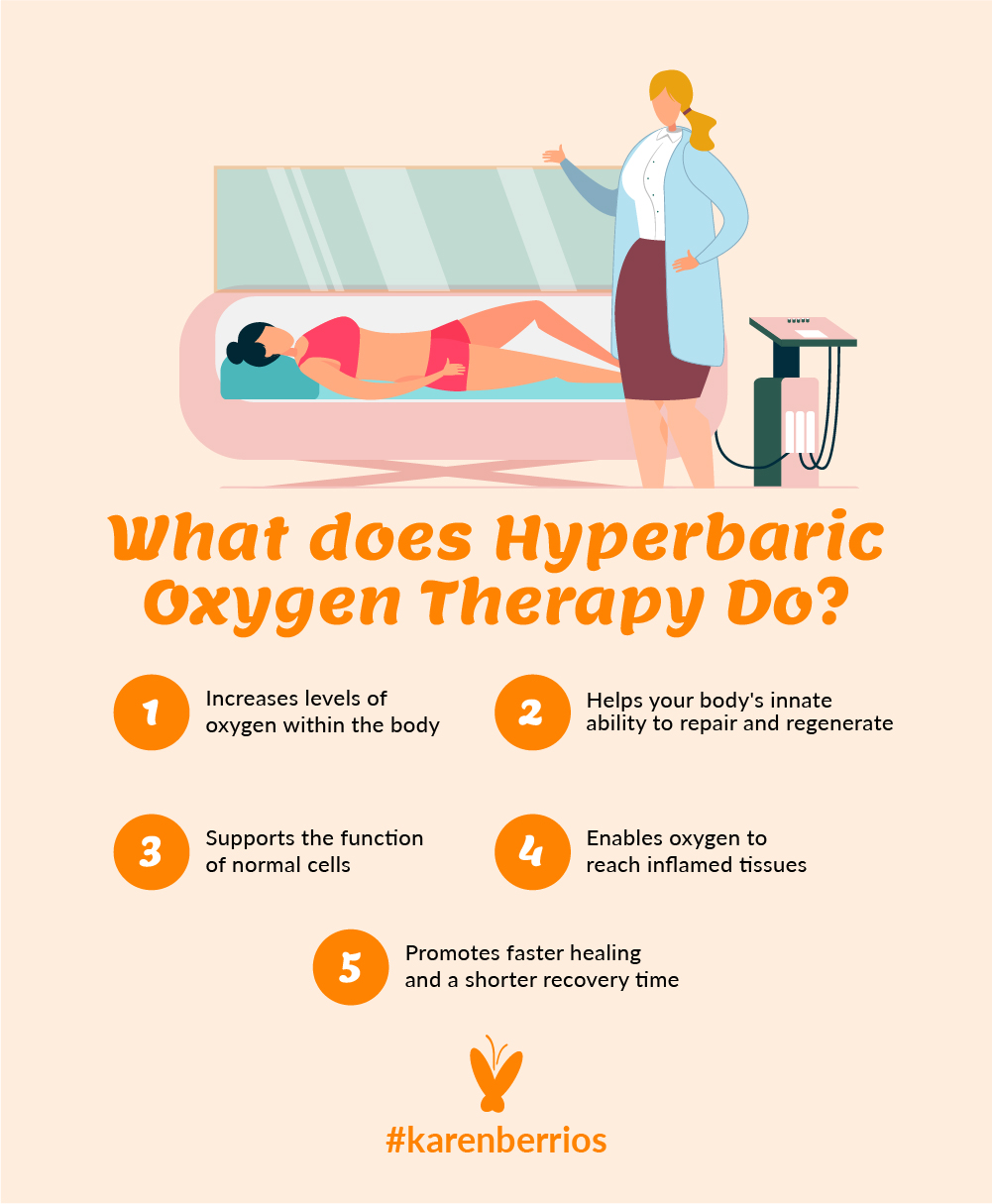 The promise behind Hyperbaric Oxygen Therapy

Oxygen therapy can help heal the body from the inside out in a lot of ways. After cancer, many people’s bodies are in disarray. Radiation, chemotherapy, these things are so tough. These therapies kill cancer cells, but it also damages good tissue. Years later (and immediately after), this can pose a threat to the body.

Hyperbaric oxygen therapy appears to reverse vascular compromise that can happen after radiation treatments. Patients start to see results after 12-15 treatments. After 40, there is a much higher success rate. It has about a 60% success rate in tissue and organ repair. (Source)

The increased pressure associated with HBOT causes the oxygen molecules to become smaller. This makes it easier for them to dissolve into and saturate blood plasma, which in turn greatly increases oxygen delivery throughout the body.

This higher level of oxygen enhances your body’s innate ability to repair and regenerate. By increasing oxygen in the body, Hyperbaric Oxygen Therapy:

Hyperbaric oxygen can starve tumors as some studies have shown that combining HBOT with chemotherapy or radiation can slow cancer. The thought is that when there isn’t enough oxygen, there is tumor resistance to chemotherapy drugs. With more oxygen via HBOT, the resistance may be decreased and make the interventions more successful. In these instances, we would call HBOT a treatment that can sensitize cancer cells and prep them for treatment. (Source + Source)

It is also thought that HBOT can help with cancer due to how it can decrease inflammation. Bend Regenerative Medicine says this: “HBOT therapy can also significantly reduce inflammation in the body in general. We know that inflammation markers are elevated in people with cancer. High levels of oxygen can also promote the growth of new blood vessels. This increase in blood vessel growth, however, does not affect the growth of cancer cells because cancer cell growth happens through anaerobic activity, not through cellular respiration.”

The truth is, there still needs to be a LOT more studies done before it can be definitively said that hyperbaric oxygen kills cancer cells.

I thought this quote from Cancer Treatment Centers Of America was a good one to consider (although keep in mind, they have a bias towards conventional treatment.)

“Lots of research has been conducted on hyperbaric oxygen’s use as a cancer treatment, often with mixed or inconclusive results. In 2015, scientists in Boston made headlines with a study that concluded flooding tumors with oxygen may help some therapies work better. ‘Since the root of all problems is the lack of oxygen in tumors, a simple solution is to give tumors more oxygen,’ Northeastern University researcher Michail Sitkovsky told NBC News. But the same article quoted the American Cancer Society as saying, ‘Available scientific evidence does not support claims that putting oxygen-releasing chemicals into a person's body is effective in treating cancer.’ A 2012 review by researchers in Norway showed that hyperbaric oxygen slowed the growth of some cancers but not others. The writers called for further research. ‘Differences in response to oxygen between different cancer types should not lead to an exclusion of HBOT as a form of cancer treatment or as a cancer treatment adjuvant for selected types of cancers,’ the review said.”

It is important to note that HBOT can be seen as a great therapy in addition to other therapies. It is just not recognized as one that can for sure kill cancer cells- especially for all types of cancer.

I believe that HBOT is a fantastic treatment that can help speed up tissue repair after cancer or tough treatments and it has been shown to possibly sensitize cancer cells before treatments, which is an incredible thing! However, more research is needed before we can say for sure that hyperbaric oxygen therapy can 100% kill cancer cells as a monotherapy.